A WORLD FULL OF TWO-FACED PEOPLE!

LIVING IN A WORLD FULL OF TWO-FACED PEOPLE!

It’s funny how people try to be sneaky in a world full of two-faced people. But the only ones they are fooling are themselves.

I try to behave, not letting it affect me living in a world full of two-faced people. Occasionally you must play the clown when dealing with a fool.

Where did my OLD ugly cousin ‘CAMILLE’ get such a crazy idea from? Curiously, the two-faced monkey fires a ton of questions eagerly while speaking on the phone. Maybe her IQ is not so high. However, the TROLL gives the impression of being intelligent. Next, she claims to be my very close cousin. It becomes clear to me, ‘CAMILLE’ doesn’t know a fiddly squat about me. However, the two-faced monkey is excused.
After all, how can she know when she in fact knows nothing? To put it in another way, and strangely, I don’t understand it; why hasn’t the fool not asked me before? Especially since she claims she is such a ‘CLOSE’ cousin to me? Nevertheless, I must play the clown when dealing with a fool.
The sneaky snake keeps claiming we’re very best and lifelong buddy’s and very close to each other. Well, well mate, your imagination and creativity aren’t that high and clever after all. A sudden silence comes over the phone as the TROLL was pondering over the next lie she could tell the person she was talking to.

The miserable TROLL makes him wonder.

What I thereafter realise while talking to my publisher; The phoney TROLL was telling him all these above mentioned lies on the day she called him.

Shockingly, the miserable TROLL only wanted to pump him for information.

“What information?” I asked.

“Yeah, you know? About your private life.”

Sneaky ‘CAMILLE’ also wanted to know if the books were a true-life story or not.

My publisher confronts CAMILLE. Immediately the troll hangs up!

Furthermore, if ‘CAMILLE’ was my real close cousin, why then question closely my publisher about my books and my private life?

Moreover, I actually got amused from hearing how ‘CAMILLE’ acted like a 3-year-old little scorned child.

Lastly, and at the end of the day, I must say; 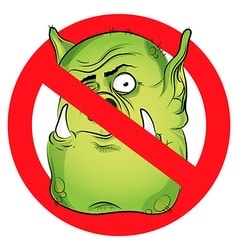 I DON’T HAVE A COUSIN NAMED ‘CAMILLE’.

To put it in another way: The earth is full of mad two-faced people in a terrifying world with miserable angry TROLLS like ‘CAMILLE’.

By the power vested in me, I now pronounce you’re… blocked & deleted. You may now…

← IT’S AS IF IT’S ME WHO HANGS THERE.
The romance was unfulfilling.  →