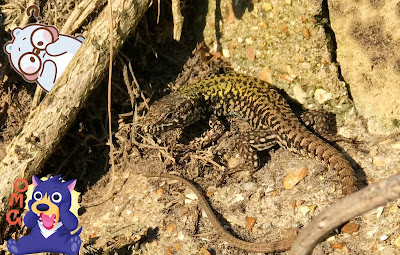 It is my ambition to say in ten sentences what others say in a whole book.

Will you believe it? There he is, the lizard watching me unscrupulous on a hot stone resting in the sun.  It’s more than difficult to get this all down on paper because I want it to be authentic. I wish to rationally sense life as Mary experienced it with her ‘lounge room lizard’. All the names of the characters, the establishments, and the places have been changed. The story is fictional, but it contains ideas based on real events.

There is merely one problem! How to tell it in ten sentences? It can’t be told in a few words. Sorry, friends! However, ten sentences might be easy to read. So, let’s jump to it. A wise man once wrote, ‘Screw it. Let’s do it.’[1] So I did it! In my new process of life, I can add one more quote by the same man: ‘Do not be embarrassed by your failures. Learn from them and start again.’ Thank you for the push. It gave me a new beginning.

Living near the beach is my dream. Walking it day and night. Falling asleep with the windows open to the sound of the waves crashing on the beach. Letting the moonlight shine through the window and watching the stars in the clear night sky. My decision to finish the story began when I moved into my new apartment, in the first row of homes facing the sea. It provides a stunning view from the balcony and is barely fifty meters from the sea and the golden sand.

The first night is peaceful as I wake up to a hot August summer morning on the south coast of the United Kingdom. The sun is shining through my window as it awakens me at ten o’clock in the morning. I’m still resting in my silky white sheets, warmly tucked around my naked body. Stretching my limbs like a lazy cat, I have no desire to get up. After rubbing my eyes, I sit upon my bed to let the blood flow through all my veins, and I look around in the room in confusion. Oh my goodness! Boxes in every corner. The balcony door is open, and a nice fresh and cool sea breeze sneaks into the room. The sound of the crashing waves reaches my inner ear with a pleasing calmness, and I think, Why not? Leave the boxes and begin writing a new book or finish the other ones I’m working on. I know my life is rather unreal. I was heartbroken for a long time, so I’ve not had the time or psyche to finish them. Being loved one day and completely upset the next turned my life upside down. The man I love often tells me, ‘Trust me. I love only you. We are meant to be’ or ‘We will be together for the rest of our lives’. I’m devastated because it’s not as he promised. It’s all a lie! The many red flags slipped past my attention about him being a dangerous person. It’s difficult to imagine and understand life without him. He is the best thing that I believe has happened to me. Too late, I figured out the meaning of the phrase ‘lounge room lizard’. I believed him and trusted him with my life. That’s the biggest mistake I ever made. I allowed myself to reveal something gruesome. The same thing he did to me also happened to the other woman I know about.

Why is it so important to use the expression ‘lounge room lizard’? This is usually a reference to lounge musicians, most often in a negative sense. This person has the character of a medieval, ordinary man, who looks charmingly good. He resembles a dehydrated, oppressed lizard and is romantically involved with a wealthy woman. He is typically shown as a well-dressed man and frequents surroundings where the rich and famous gather. He is the type of man who will seduce a wealthy woman with his flattery and deceptive charm. Oh, golly gosh! Do you believe it? He has so much charisma. He is extremely convincing and pretends to be a first-class trustworthy and charming person. I have never met any person so full of good ideas as he is. Amazing how he can captivate people in front of an assembly. This chap is enchanting with his skills and high energy.

Those were the main words during our time together. Later, various problems began to arise, with his many cunning plans. His professional approach or his projects usually started to awaken a great deal of speculation, but often, it was too late to see through his disguise. Unfortunately, I did all my research too late, so I was excruciatingly conned, loving him blindly. A Russian proverb says, ‘Love is evil. You can fall in love with a goat.’ In other words, love is blind, and the pretty headless chick becomes blinded.

The phrase ‘loungeroom lizard’ presumably relates to the cold and insinuating quality of the reptile. It has sharp claws like an eagle, which is unscrupulous when snatching his next victim. It’s usually a distressed woman, whom he wants to lure into marriage.

Mary is such a sorrowful pretty little doll. He eagerly tries at the early stage to seek some benefit from her, because he never married the previous one. The woman usually has valuable possessions and money that the lizard man can profit from. The more naive, unhappy, and helpless she is, the better for him. He strikes with his nasty sharp claws into her vulnerability and misuses her to the last drop, without any empathy or remorse. He chillingly torments her until she is severely wounded, like a helpless animal lying in the gutter, abandoned and helpless in its misery! Why has he done so? Later, she discovers the maliciously cunning narcissistic artist in him, an evil psychopath! A bloodsucking leech who sucks the last blood out of others throughout his entire life. His complete lack of self-discipline and respect for obligations, rules, and social norms are immense, and his speech patterns are repeated lies. His mood swings are almost impossible to see through, and this is the man she trusts! He has the flawless ability to bend the facts. It’s always someone else’s fault. That is his best play. No matter what, that’s how it’s done.

← The bright side of life.
Great comments and reviews →