Why did I choose to use this special woman as my book cover?

Simple! I love the art!

After more than ½ years of searching for what I imaginary had in my head, I found the Mexican Airbrush artist Daniel Esparza from Los Angeles, California. He has enjoyed painting since he was a child. As soon as I saw his art, I fell in love with his creation. Amazing. I just knew; this is it! What he had created was exactly what I had fantasied about for my book cover. He specializes in Dia de Los Muertos (Day of Dead). This ancient festival is rooted in Mexico’s pre-Hispanic past. It is celebrated every year on November 1 (All Saints ‘Day) and November 2 (All Souls’ Day). 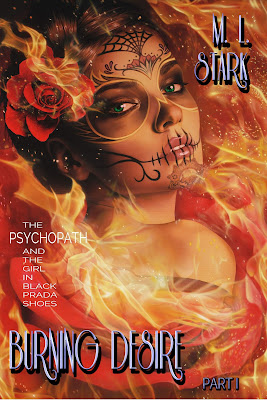 So, why chose that theme? Daniel Esparza’s female creation had the fire I needed. She had the sparkling in her eyes and expression of what I felt my female character represented. The Burning Desire for love and yet she was living among the dead and lost souls.

The first time I was intrigued by Dia de Los Muertos, was when I saw Frida Kahlo many colorful paintings. Frida died in the mid-fifties and first became famous 50 years after her death. I subsequently learned that Frida Kahlo is enjoying something of a cult status now among those of Mexican heritage. The heart of the holiday is the honoring of deceased relatives. Still, why then use this theme? My characters in the book are not dead. The story is not about honoring the dead. As a catholic, I somehow do believe in welcoming back the souls of lost love ones for a brief visit.

Then I kept on having this picture in my head of; La Catrina who has come to symbolize El Dia de Los Muertos. La Catrina is created in 1800 by Mexican José Guadalupe Posada, portrayed as an elegant well-dressed woman, with a wonderful face and she refers to rich people. She has the ace of spades which is a perfect symbol to represent the ambivalence between life and death and considered both a symbol of good luck and the opposite. Well, my character Mary has some good luck and also the opposite. She is also rich and elegant, yet Mary thinks everyone is equal in the end.

Later, the Mexican artist Diego Rivera, husband of Frida Kahlo, who painted her on a mural in Mexico City, giving her a new body and identity, La Catrina. Now she is famous and often used among tattoo artists. I subsequently realized I had some special feelings regarding my love for Spain and Mexico. Their Spanish culture and the language. Strangely and by coincidence, all the artists where somehow all the sudden linked to each other in my imagination for the book cover. This was without me having that specifically in my mind. I often have had some kind of Deja-vu experiences regarding Spain and their culture and have always felt magically drawn to it since I was a teenager.

Daniel Esparza had captured all the important things I needed for the book cover. The Catrina women, the rose in her hair, the spider web, the floral ornaments to the religious and the sophisticated elements with his stunning art of the women, representing the Burning Desire. Great work, without making it overdramatically deadly.